Unite a systematic way to achieve exploratory validated learning, the PopcornFlow approach, with the focusing and knowledge discovery contributions of the Levels of Disagreement of the Theory of Constraints.

PopcornFlow is an inspiring way to create validated learning through continuous experimentation created by Claudio Perrone. It can also be applied successfully to strategic thinking with real options. In this post we will see how PopcornFlow can be used with TameFlow to build one of the pillars of TameFlow, namely to cultivate the Unity of Purpose pattern.

Here I assume you are familiar with PopcornFlow. (To learn more about PopcornFlow, see Claudio’s site http://popcornflow.com.) One interesting aspect of this approach is highlighted in Claudio’s drawing: 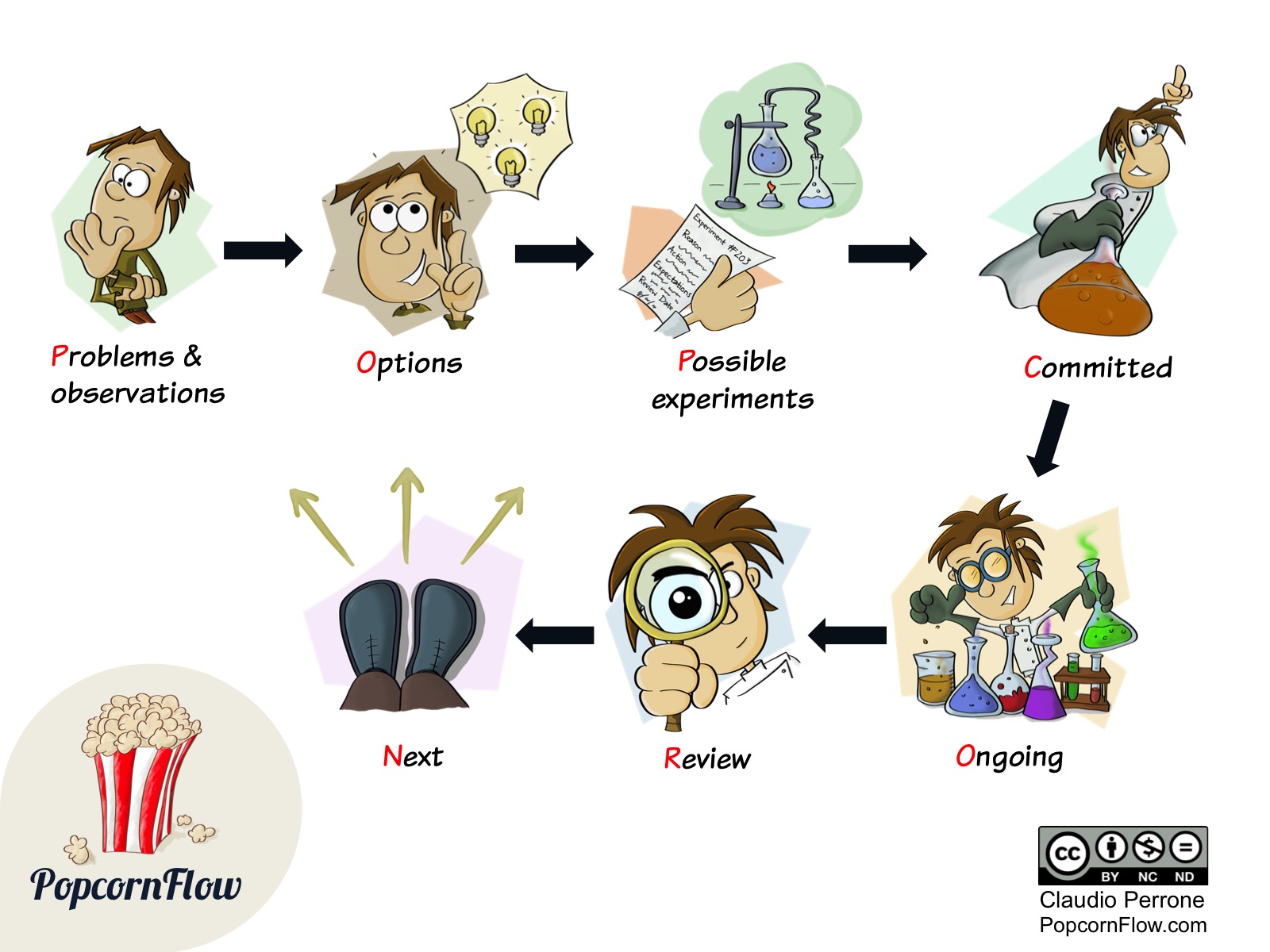 In particular, we want to consider the three arrows that go back from the final state Next to the first states Problems and observations, Options and Possible experiments. These arrows are significant because they build in a learning loop into the organization. What is more, they can be used to create a virtuous circle which subsequently builds up Unity of Purpose.

In order to do this we can integrate extend PopcornFlow with some elements which are typical of TameFlow. TameFlow strives to train the teams to make unanimous decisions in as often as possible. The purpose of this is not so much arriving at unanimity as such, but more experiencing the effects of the effort of getting there. Conflicts need to be addressed, assumptions must be surfaced, and people are taught to listen more purposefully to what others have to say. By cultivating these skills, the teams will become much better at exercising their collective intelligence. After a while, they will be able to make (collective) decisions much quicker than ever before. In this sense striving to reach unanimity is a way to improve speed of execution.

To this end, we will apply a variation of how the Theory of Constraints deals with resistance to change by identifying and addressing the nine layers of resistance. The question becomes: where can we find resistance when adopting the PopcornFlow approach? Fundamentally we can find resistance in the first three steps. They correspond – broadly speaking – to resistance towards the problem, the solution and the implementation.

Therefore, we will introduce a specific practice that will function as a gate in the transitioning out of the first three steps of PopcornFlow, as illustrated here: 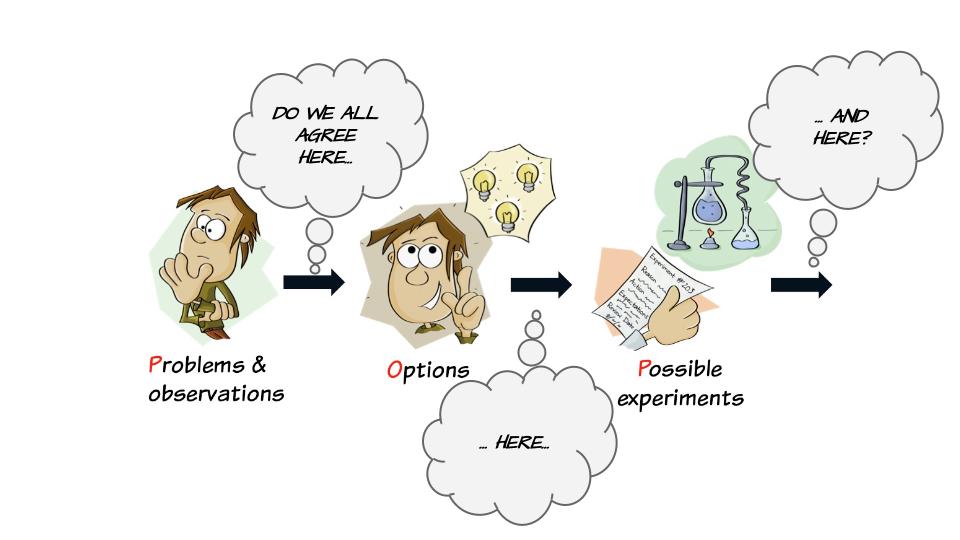 At each one of those transitions, we want the whole team to be in agreement. We can work it out by highlighting where the team is in terms of Layers of Disagreement, as illustrated here: 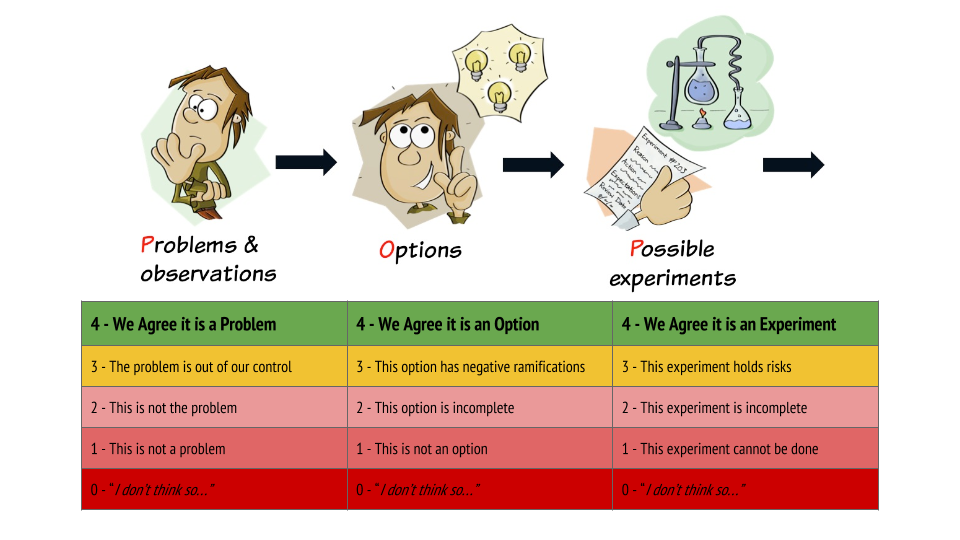 The team’s level of disagreement can be assessed by asking the team to do a simple dot voting (only one dot per team member) on a white board or flip chart. For instance, in the case of a problem, it might look like this: 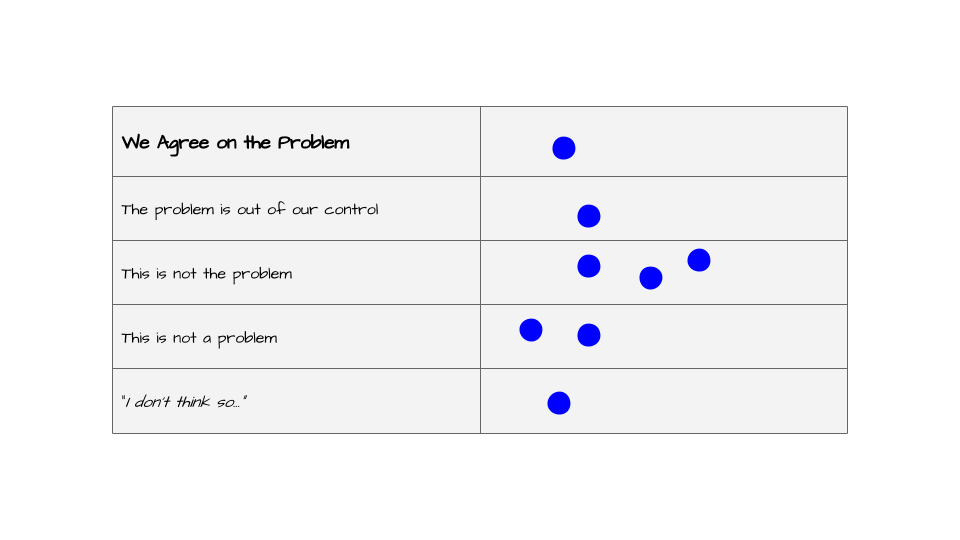 You will not be able to effectively transition from one stage of PopcornFlow to the next unless there is a strong agreement. In other words, most of the dots are at the top of the voting table. Unless, of course, you are applying TameFlow, where you want all of the dots to be on the top most row of the voting table, like this: 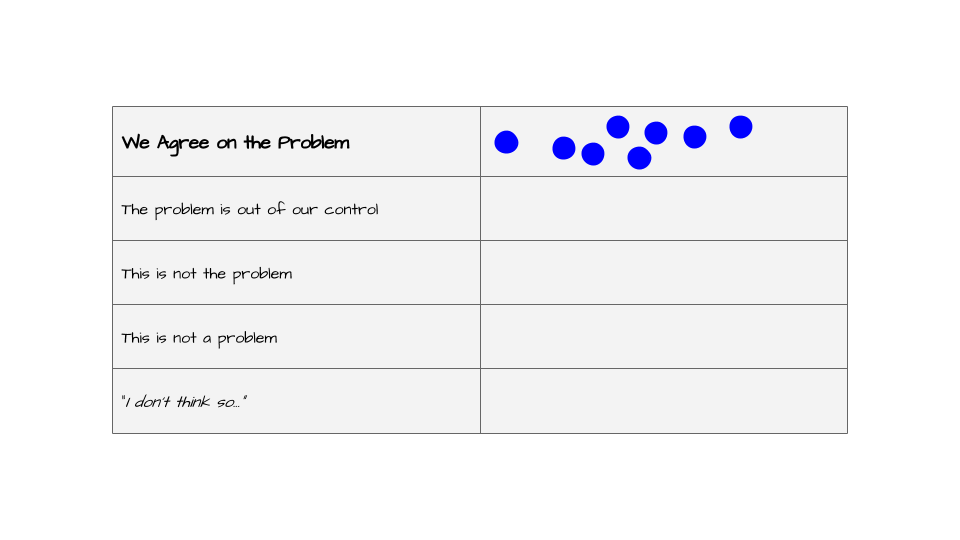 Whenever there is disagreement, you need to address the lowest level first, and then move up to the higher levels, from zero to four.

Level zero is the “I don’t think so” reaction — and is often an indicator of social or psychological problems in the team or in some individuals. In a functional team you should never have any dots on level zero. If you do, you have reasons to be concerned. You might have to address such cases with techniques such as Non-Violent Communication to let the team (member) heal. If some members consistently vote for Level zero, then you may need to consider if they are fit at all to be on the team.

Level one is one of denial, which could be due to ignorance (of the problem), a matter of fear, or even resignation and acceptance of a presumed state of fact or because of past failures. It then becomes necessary to uncover why this is the case, often digging into the past work experiences of the individuals who are at this level; and show why their underlying assumptions might not be true.

Level two is one of incompleteness and insufficiency. More information or further ideas are needed to meet the objections that are raised.

Level three is one of agreement in principle but with exceptions. It is the “Yes, but…” answer. The objections raised at this level are usually very real; and if they are addressed they will resolve the disagreement and improve the general understanding of the issue.

The levels one through three can be negotiated exactly as the Theory of Constraints deals with levels of resistance. In addition to that, one can use the Core Protocols to let the team quickly develop their collaborative decision making skills and converge towards unanimity (for more information about the Core Protocols see Chapter 8 in: Hyper-Productive Knowledge Work Performance).

The objective is to have as much agreement as possible before proceeding, and in general avoid having anybody at levels 0-2. You need at least a majority of votes at level 4, and you may accept a few at level 3 before going on. The more you are able to get all team members up to level 4, the more the execution of the next steps will be quicker and energetic.

Finally, the more you train the teams to arrive at unanimous decisions, the easier it will be to find your Unity of Purpose, one of the founding pillars of TameFlow.

It is Not about Prioritization

Claudio Perrone rightfully suggests that dot-voting techniques can be used to prioritize problems and even options. The team needs some mechanism to exercise a choice, to decide which problems or options are worth working on. Claudio suggests various ways to do this:

All of these are ways to decide about what to do next. Furthermore, the very nature of PopcornFlow is such that the outcome of the experiments also highly contributes to what you can do next. These are all ways to decide what to pick among the many alternatives that are visible on the PopcornFlow board.

It is at this point that the dot-voting on the levels of disagreement — for that single alternative that has been chosen, and not for all which are available on the board — will help in making a “go/no-go” decision. It is like a sanity-check before take-off. And, in TameFlow, we really want to have the whole crew on board before taking off with anything.

It is not about deciding what to do next, but to decide if you can do that with full engagement, energy, and focus.

It is Not about Unanimity Either

Prioritization is necessary but not sufficient in the TameFlow perspective. As mentioned above after having picked an alternative through some prioritization mechanism, then to be consistent with the principles TameFlow, we need to additionally do the dot voting for finding the levels of disagreement for that particular problem/option/experiment that has been chosen. In TameFlow you don’t want to start working on something unless there is complete, unanimous agreement about it.

However, even if it might sound contradictory, the purpose is not reaching unanimity per se; but it is going through the process of getting there. The purpose is to force all team members to really listen to each other, and hence develop mindfulness and awareness; and to stimulate deep thinking about why the disagreements are there. It is by going through this process that we want to further develop a common understanding of reality and find out what weaknesses are hiding in our thinking about it.

It is about Focus and Knowledge Discovery

The most important aspect is in the details of the resolution of the disagreement. It is here that you will often find breakthrough solutions. Disagreement is good: it shows that there are different perspectives. There are more neurons to be connected in the collective mind of the team. This is a kind of positive disagreement because it leads to creation of new knowledge through the very resolution process. Conversely, we want to find and weed out negative disagreement that just prevents any sort of progress, especially in a high performance setting.

The levels of disagreement are not a prioritization tool to pick among alternatives. Specifically, they are:

In most places, where majority-decisions are made, often very good ideas are lost because they are overrun by the decision making process. In the false conviction that majority decisions allow for making progress faster, often the uncovered knowledge that lies beneath positive disagreement gets lost. And when your focus is knowledge-work, you really don’t want to miss any opportunity to discover any relevant knowledge.