Here is today’s episode of the “Campfire Talks with Herbie”.

Name (and Company/Affiliation if desired) 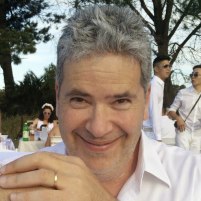 I have no idea.. Who does? My LinkedIn profile says:

Australia’s longest serving agilist, played a part in the formation of the Agile Alliance and credited in Beck’s first XP book, Created the first agile training games and ran them at the first agile conference, XP2K. Led transformations at GMAC and Websense in the US, and IAG, CBA and Ray White in Australia.

Before that, three decades in delivery programs with leading roles on the $9B CBA Mobile Channel “Kaching” product, Invensys “I/A Systems SCADA” which now controls a third of the world’s oil infrastructure, and Telstra’s OMP grid which has controlled Austalia’s international telco network for 2 decades.

Authored patents in scheduling, e-currency, pattern recognition and social ratings, led various startups and open source projects including the original Wikipedia wiki engine. Former proprietor of the Limpinwood Teahouse. Author of The Agile Tao and founder of the XSCALE Alliance.

But those are mostly things I did hoping to pay the bills. Who am I? There’s a small black cat with breathing difficulties sitting at the foot of my bed as I write this. On cold nights when he gets wheezy I hold up his chin with my hand so he can sleep. That’s who I am, really.

How did you get involved with Agile, Coaching, Organizational Performance? Are you making a living in this sector?

I first took an interest as an architect for a program at HP in ‘97. An Oxford PhD came on and thumped the table with an old time big-process book, The Fusion Methodology by Coleman Of Kings’ College, which meant filling out a lot of paper forms to get permission to cut a line of code. To fight that I looked up Coleman and found he’d got into McConnell style RAD, and I was able to finagle that program in that direction and got a nice landing.

I’d been interacting with folks on the C2 Wiki for a while back when it was the world’s only wiki. Kent Beck turned up with a weird idea he called XP. That was ‘98 IIRC. I could see Kent was nuts so I put up a set of “XP Challenge Questions” on the wiki and he cut through them like a knife through butter,

That inspired me to want to use XP but the only place using it then was the C3 project in Portland. I was living on the beach in San Diego and not keen to move. So I started going to interviews saying I’d do their job so long as we could use XP …

This was the dot com boom so hiring managers were desperate for people who could actually do the work. But my XP approach got nothing but blank looks until I was able to convince a hiring manager at GMAC named Mark Anderson. Mark wasn’t actually the program manager so might have been a bit more receptive than if he had been … but anyway I got the nod.

Fast forward to 2014. I was strategist and senior coach for a successful transformation at Australia’s largest banking group, CBA. I shared a stage with Michael Harte, the Group CIO, as he declared “Agile is now one of the five pillars of this bank’s future”. So I thought then I’d learned enough to contribute some ideas back into the agile movement, and XSCALE was born.

How did you discover TameFlow? And are you or will you use it professionally?

I was looking for material on throughput accounting and you turned up. We have some community members in common too, Minton Brooks especially, and I’m interested to figure out where the natural connections are. In particular I’m trying to figure out what problems TameFlow has better solutions for than XSCALE. I’m not certain yet, which is why it’s really neat for us to chat about same.

Give us a typical day in your life! And what makes you happy at the end of that day?

I wake about 5am with some vivid and troubling dream from the universe next door. I waste time on the Internet for an hour and go back to sleep until 9. Then walk down to my local beach and paddle a surfski for an hour and have a swim.

If it’s an eating day – I do alternate-day fasting – I’ll have breakfast with my beautiful spouse and brilliant and brilliant offspring too. Otherwise I’ll just catch the bus up the hill and do some household chores before settiling down to work on something useful.

But as Lennon said, life is what happens while you’re busy making other plans. And then maybe dinner or maybe a speaking engagement or help some folks in XA sort something out or write something up or program something or just goof off … and then feed the cats and change their boxes and go to bed. Sleep is really the most wonderful thing!

What’s the most important skills, insight you’ve developed while getting involved with this industry? What were the greatest challenges on your path? And rewards?

Most important skills … I was always introverted growing up but these days I spend most of my time communicating with people. It’s not really about public speaking, more thinking about the direction a conversation is going and helping it along, helping the participants develop a deeper harmony.

Most important insight … there’s a nice passage in Lao Tzu I translate as “warm heart, open mind, and coiled spine”. Though more important still would be the 3 wrong questions. See, back in 2007 I was architect and manager for Reuters’ first agile program. I hadn’t managed enough so didn’t realise how hard it is. And I wound up in hospital because of it. Three timezones, deadline put in place by the EU parliament, and multi-billion dollar consequences if we didn’t hit it.

Anyway I was lying in a hospital bed trying to figure out what I was doing wrong and realized it came down to worrying about 3 wrong questions. They were, “do we have enough time?”, “is it possible?” and “do we know of any show-stoppers?c. Where, as any good manager knows, the right questions are “do we have plenty of time?”, “is it easy?” and “are we certain there are no showstoppers?”. Hard learnings!

Greatest challenges … there was a point in about 2015 where I couldn’t find work. I’d gone grey and the jobs I’d been able to walk into before were going to people I’d mentored years earlier. People a generation younger than me. I could talk about all the things I’d done until I was blue in the face, but people want to be coached by people in their own generation, not by someone like their parents. So I had a choice – I could become a has-been or reinvent myself as a boffin. That was a big leap into the unknown. But it worked out all right. Sometimes a big leap is the only thing you can do.

Greatest rewards … I get to contribute something fundamental to the development of human civilization. Really simple things like the leadership-as-a-service protocol, round councils, 3D-kanban, the descaling metrics … these are changing the way humanity does its business, If we reach the stars before we go extinct, I’ll have had something to do with that. I feel all right about that.

XSCALE Alliance is my learning ecosystem and I’m keen to forge links between it and the TameFlow Community. I think we have a lot to learn from each other and I’m only just coming to grips with how to grok that. As to reaching out, I’d suggest TF enthusiasts talk to Minton Brooks or Paula Stewart.

How do you see your future? And does TameFlow have a role there? And what do you believe about the future of TameFlow?

For the past few decades I’ve been driven by needful things. I’ve always worked on the cutting edge, sometimes the bleeding edge, and every so often the air edge of things. I see most of my work in the future as air-edge stuff, looking at how we can disrupt and leap-frog rather than how we can apply current insights. That’s really exciting to me.

As for Tameflow and XSCALE, right now I’m trying to figure out which problems we may solve better together, and how we might differ, and how we might leverage the differences to enrich both ecosystems. I hope this fireside chat will be the start of a deeper conversation about these things.

If you found the topics in the “Campfire Talks with Herbie” interesting, there is much more to learn about them in the Tame your Work Flow, How Dr. Goldratt of “The Goal” would apply the Theory of Constraints to rethink knowledge-work management book.

To ensure you don't miss future episodes of the "Campfire Talks with Herbie", subscribe to receive the email notifications about the upcoming events.

TameFlow and the Manifesto for Agile Software Development

How does Agile and the Manifesto for Agile Software Development relate to the TameFlow Approach?