The TameFlow Books cover a broad range of topics on operational, financial, informational and psychological flow. 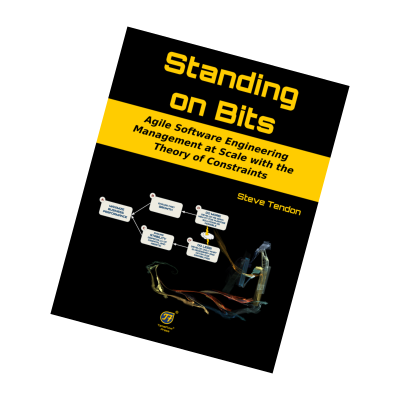 Standing on Bits, Agile Software Engineering Management at Scale with the Theory of Constraints, by Steve Tendon (2022)

The current crop of Agile approaches and the Theory of Constraints have thus far been like the proverbial oil and water. Agile enthusiasts have always considered TOC as grounded in manufacturing, and thus completely inadequate to handle the peculiarities of knowledge-work, and software engineering management in particular. On the other hand, TOC practitioners, notwithstanding the decade long experience in many different fields, have a hard time accepting Agile methods, as they do not seem supported by the scientific rigor and logical reasoning that is typical of TOC; and yet they do not have a workable solution for software engineering management. This book proposes how to merge ideas from Agile and the Theory of Constraints to get the best of both worlds, and be able to manage software engineering efforts at scale.

Details about "Standing on Bits" 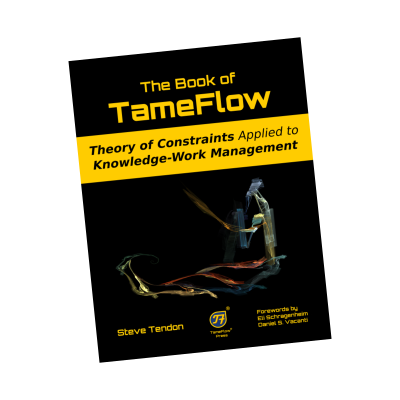 The Book of TameFlow, Theory of Constraints Applied to Knowledge-Work Management, by Steve Tendon (2022)

This book focuses on how to manage Operational, Financial and Informational Flow in large organizations that have to deal with: multiple Projects or Products, Events (or deadlines), Stakeholders, and Teams — or PEST environments.

Deploying management methods that deal with thousands of employees, clients, teams, projects/products, under heavy deadlines, all the while dealing with Volatility, Uncertainty, Complexity and Ambiguity (VUCA), is a formidable challenge. This book shows how to use the TameFlow Approach in such demanding situations, and yet arrive at optimal solutions that provide the best economic benefit to the business.

Details about "The book of TameFlow" 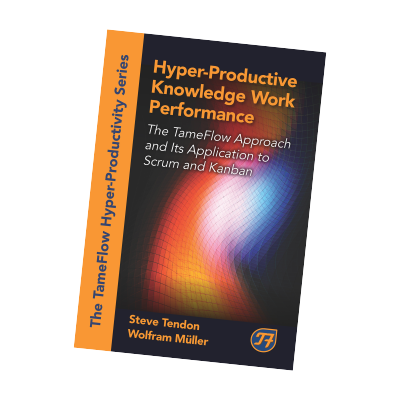 Hyper Productive Knowledge Work Performance, The TameFlow Approach and Its Application to Scrum and Kanban, by Steve Tendon and Wolfram Müller (2015)

The first part, for business leaders and managers, delves into management, leadership and governance topics and explains how to think when leading a knowledge-work organization.

The second part, for middle-managers, team-leads and practitioners, gives actionable and practical advice on how to apply the ideas of the TameFlow Aproach to two of the most popular knowledge-work management methods, namely Scrum and Kanban. 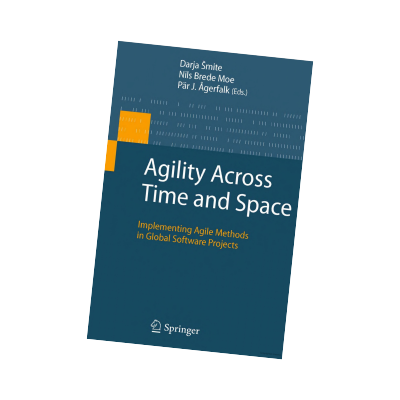 This book is a collection of essays by multiple authors, focusing how to use Agile methods in globally distributed teams.

In particular, “Chapter 4 – Tailoring Agility: Promiscuous Pair Story Authoring and Value Calculation” was contributed by Steve Tendon and illustrates a few of the practices used in the TameFlow Approach when seeking to create Unity of Purpose and build a Community of Trust between stakeholders that have diverging interests.

The chapter describes an initiative of a multi-national software organization involving several business units in eight different countries. The business decided to try an Agile approach after two previous failed attempts with traditional approaches. The case is about implementing agility in requirements gathering, with estimation and planning processes, in a global and international setting. At the outset there was a lot of distrust and conflict between the various country representatives and stakeholders. The Agile approach was inspired by XP and tailored to meet the particular situation.

Two innovations were critical. The first innovation was promiscuous pair story authoring, where user stories were written by two people (similarly to pair programming). The pairing changed very frequently – as often as every 15 minutes – to achieve representation of diverse and often conflicting perspectives and needs.

The second innovation was about the assessment of an economic value (and not the cost) which was attributed to individual User Stories. Continuous recalculation of the financial value of the User Stories allowed to appraise the project’s financial return.

The transitioning to Agility in the broader international context allowed the team members to reach unanimity of decisions making, vision, purpose and execution.

Get "Agility across Time and Space" on Amazon