We can reason about disrupting markets with the Six Innovation Questions.

While most readers will discover the TameFlow Approach because of the techniques we are teaching to better manager the Operational Flow, being a Systems Thinking approach, we must always look at the larger picture.

From a Constraints Management perspective, if our business is not able to sell its products or services, it is a clear sign that the Constraint is in sales or marketing functions. Or even worse: it could be in the market itself. The situation is typical for startups that have to literally create market demand from nothing.

In such instances, rather than just trying to figure out how to create demand for new innovative products or services, a startup should consider the even picture: namely if they might have the opportunity to disrupt existing markets. There might be many ways to go about this.

Some of the models to consider could be:

Anyone of the above mentioned approaches could be used from a TameFlow perspective. Some models are better at sense-making and help gaining an understanding of the current market structures. Others better support decision making and help turning ideas into actionable propositions.

Outcome-Driven Innovation/JBTD comes to mind as very apt for capturing customers’ needs. Warley Mapping helps creating situational awareness that can be reasoned about in strategic terms; and it is also based on patterns and thus naturally fits into the TameFlow way of thinking. Running/Scaling Lean is very empirical and based on continuous validated learning; and, in particular, in the “scaling” parts it is clearly based on the Theory of Constraints and thus another natural fit for TameFlow.

Lately, in the TOC camp, there is lots of work going on about finding strong synergies between Blue Ocean and TOC itself; in particular by Humberto Baptista and Eli Schragenheim.

Treating this topic, though, we must not forget that Dr. Goldratt himself has given ample treatment to how we might disrupt markets. Simply by applying the Thinking Processes and Strategy & Tactics Tree could take us a long way.

Dr. Golratt addressed the issue even more directly. In his book Necessary but Not Sufficient - which Dr. Goldratt wrote together with, among others, Eli Schragenheim: the very same Eli Schragenheim who wrote a foreword to my Tame your Work Flow book - he formulated four questions to assess the disruptive potential of any new innovation. Later the questions were reworded and extend to become six; often referred to the Six Technology Questions of Goldratt. Six simple questions, the answer to which holds the key to market disruption.

Since there is no “canonical” form for these question, here I present them with my own words, and call them the “Six Innovation Questions” 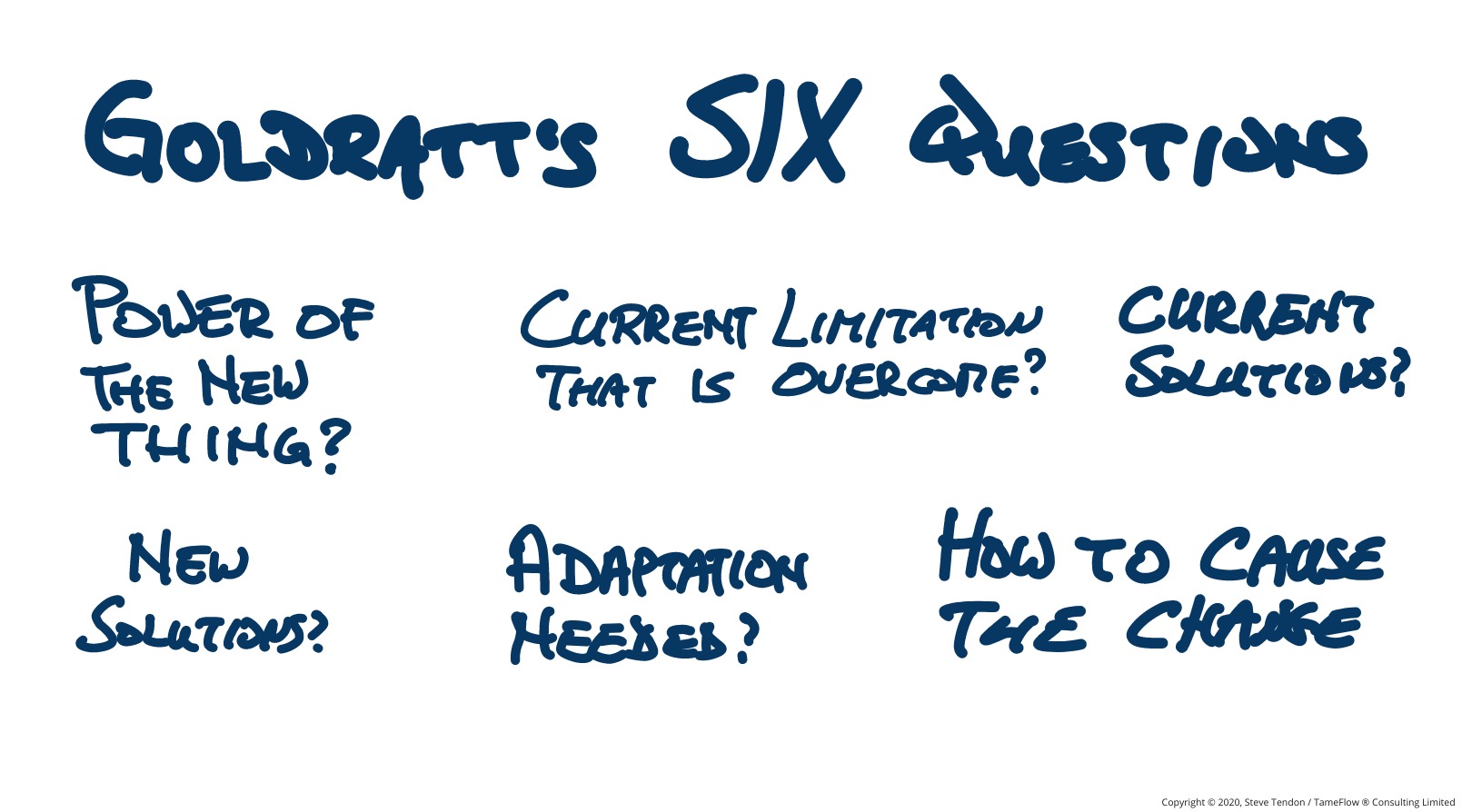 Question 1: What is the real Power of the Innovation?

Any sufficiently advanced technology is indistinguishable from magic.

Magic is always perceived as some power that make impossible things happen. New technologies will always be perceived like that: as having a power to make the impossible happen. Because new technologies are unknown and little understood, it is way too easy to arrive at misplaced conclusions about what it really does.

This is particularly the case with digital technologies. Once they are first presented, plenty of people, fascinated by the technology but not seeing its real utility, will consider it as the proverbial solution in search for a problem. Conversely, others, over enthusiastic about the technology, are using it for purposes which are much better addressed by existing, conventional solutions.

In either case, the issue is that of not truly grasping and understanding what the Power of the Innovation truly is. To establish if we have truly identified this Power, Dr. Goldratt suggests to do a thought experiment (a “gedanken” experiment): we imagine how much worse off we would be if the innovation did not exist. Imagine all the extra work, effort, inconvenience that you would have to endure without the innovation.

For instance, nowadays we are so accustomed to computers and computing devices (laptops, smartphones, watches, cars…) that we take them for granted. Many of us cannot imagine how things were done before. Well things were done; only orders of magnitude less efficiently. So fast forward into the future: let’s phantom that someone would take away the Power of our innovation. Would people then get upset and complain they cannot imagine how things were ever done without the innovation. If we would hear such complaints, then we have truly found a significant innovation.

When considering new ideas, we need to reason about the Powers they afford that are such that, if they were taken away, we would lose an immense benefit; a benefit that the older set of technologies, solutions, policies are not able to provide.

The only way an innovation can bring benefits is if it reduces an existing limitation - or, in other words, addresses a Constraint.

And hence the next question:

Question 2: What current Constraint does the Innovation Elevate or Eliminate for the customers in our target market or market segment?

This question was originally worded as: “What current limitation or barrier does the new technology eliminate or vastly reduce?” Presumably the choice of words was done in respect to an audience who was not familiar with the Theory of Constraints - after all they were written in a business novel that tried to reach as broad an audience as possible. But in the context of the TameFlow Approach we are all knowledgeable about the Theory of Constraints; and thus re-wording this with the terms used in the Five Focusing Steps makes sense.

Question 3: What are the current workaround, inadequate or insufficient solutions?

The original question was worded as: “What polices, norms and behavior patterns are used today to bypass the limitation?” Oftentimes people are not even aware of the Constraint that is limiting their endeavours. Yet they do things or behave in ways to workaround and address the deficiencies; and many times continue to do so even when the Constraint is no longer there, just out of tradition or habit, because “that is how we do things around here.”

The best way to understand this is with that funny story about a family that always cut their turkey in half before they cooked it… because generations earlier Great Grandma’s oven was not big enough to stick a whole turkey inside it.

The policey - cutting the turkey - was just a workaround for the oven that was too small. The policy became so ingrained and unquestioned that it remained even after the newer bigger ovens were no longer a limiting factor!

Question 4: What do we require the customer to do to get the most out of the innovation?

The original question was: “What policies, norms and behavior patterns should be used once the new technology is in place?”

In other words, if we will provide a larger oven, we must make sure that the family stops cutting the turkey in halves.

The point is that the adoption of any new technology will always come with a change in behavior of its users. At times, that change must be facilitated, because it might not be self-evident.

Question 5: What adaptations does the innovation need to support its adoption?

The original question read as: “In view of the above, what changes/additions to the new technology should be introduced?”. The sense here is that the innovation itself might need to be enhanced to make it easier for its users to change their behaviour or understanding.

As an example, consider the rear-view mirrors of cars, that often come with the written warning that “objects appear smaller.” It might appear obvious; but maybe it was not when such mirrors were first introduced. That simple reminder text has presumably helped users to better use that innovation. It encouraged the users to be more attentive (change their behaviour) when using the mirror; and thus exploit the mirror to its full potential.

Question 6: How do we cause the change?

This question aims to address issues of resistance to change, which is just natural and to be expected when there is novelty. It is here that the Levels of Disagreement of the Thinking Processes can come to the rescue.

For an example of how to use the Levels of Disagreement see the post TameFlow and PopcornFlow foster Unity of Purpose.

In conclusion, if we intensely aim our attention at the limitations - or better yet the Constraint - of a whole category of users, a market or a market segment, and strive to elevate or eliminate that Constraint we have a simple but powerful approach to uncover innovations that work.

They work because they hold the Power of the Innovation.