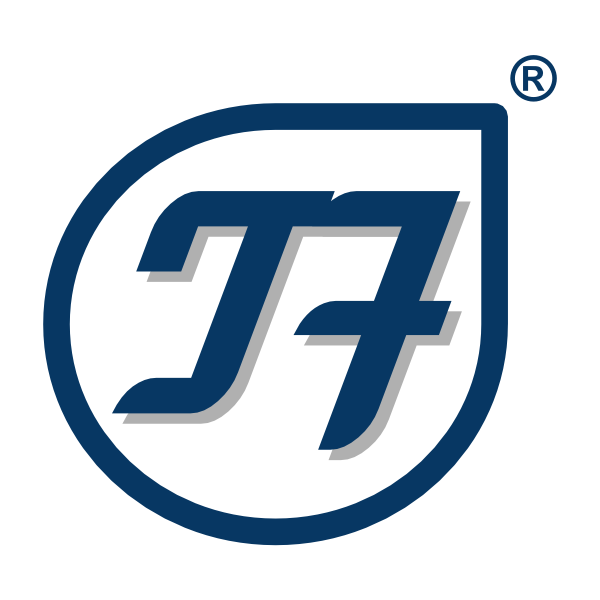 The show was about OKRs and how the TameFlow approach can be used to improve them. 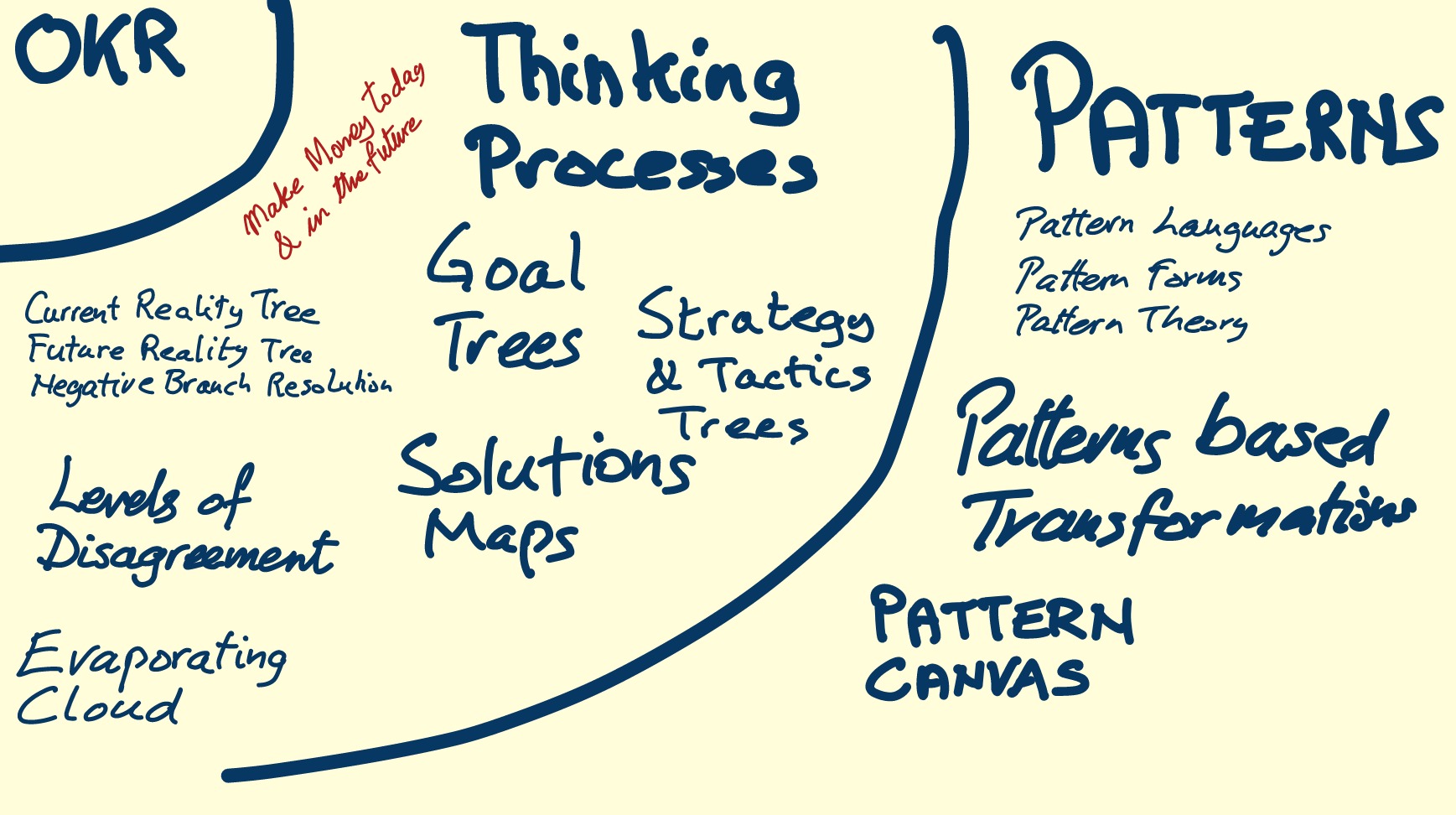 OKRs can be considered as a great starting point onto which develop further with ideas form the Theory of Constraints or from the TameFlow Approach.

From the Theory of Constraints we can relate to Goldratt’s saying that “The Goal” of a company is to “Make money today and in the future.” The sentence has to parts. the “Today” part refers to the running of operations to keep the cash actually flowing in. It is the realm of Operational Flow and Financial Flow. The “in the future” part refers to creating the future conditions for continuing to make money. It is about the Flow of Initiatives. It is the realm of Strategy and Strategy Making.

From the TameFlow perspecitve we can consider enhancing both OKRs and TOC’s startegic tools by using Patterns, Pattern Forms, Pattern Languages and Pattern Theory. We will be able to envisage Pattern-based Transformations.

The Goal Tree: An OKR tree with more logic

In the example figure below, we reperesent one possible Goal Tree that attempts to capture the essence of “Make money today and in the future.” Illustration is taken from the Tame your Work Flow, How Dr. Goldratt of “The Goal” would apply the Theory of Constraints to rethink knowledge-work management book. 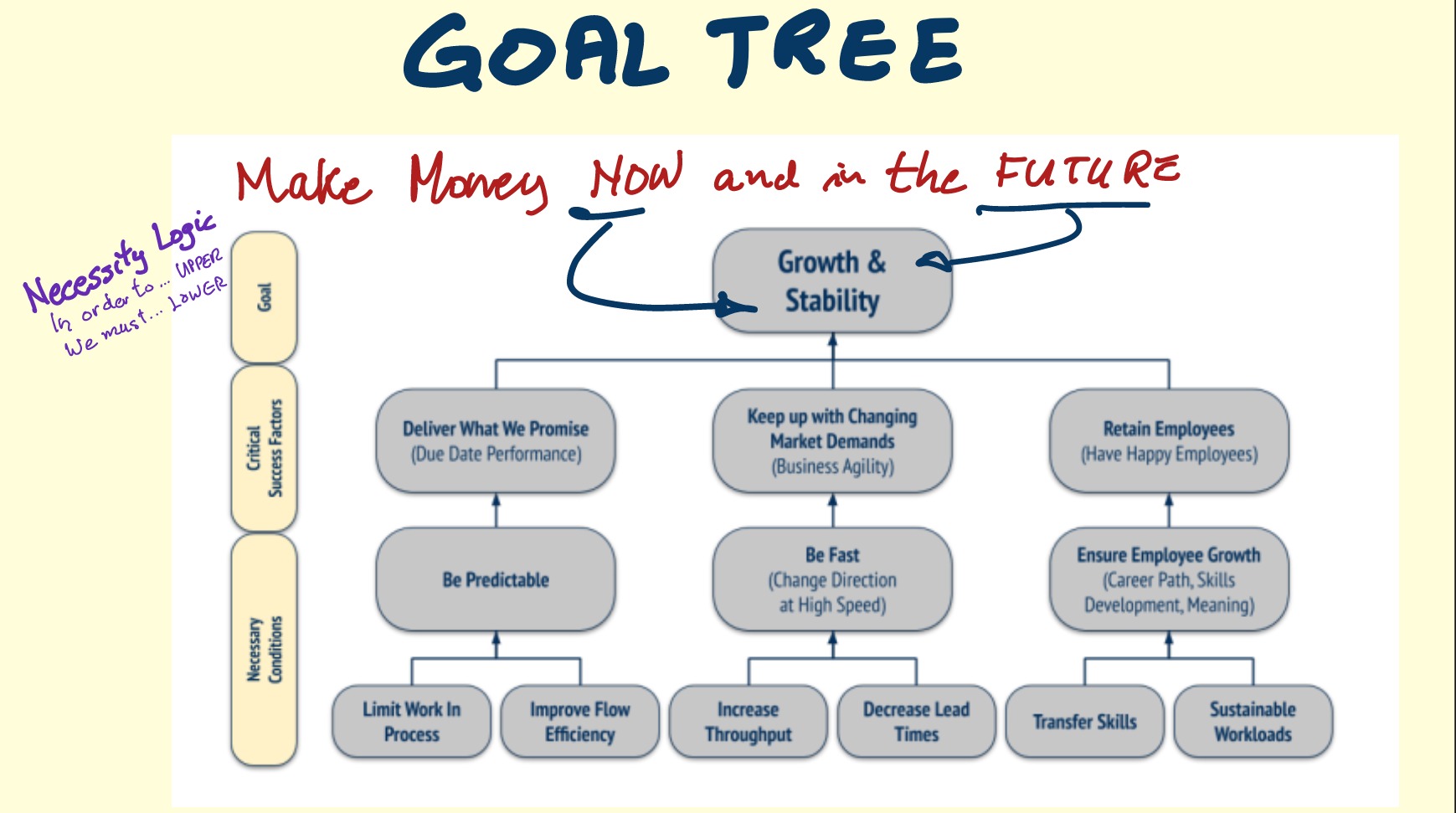 The goal is articualted as achieving “Growth and Stability.” Stability is about today; growth is about the future. The Goal Tree resembles an OKR tree. The first few nodes under the goal are considered as Critical Success Factors. Those beneath are all Necessary Conditions.

The Goal Tree is goverend by necessity logic_We can use that to read off the diagram, using a construct like: “In order to [Upper node] we must [Lower node].” For example:

In order to BE PREDICTABLE, we must LIMIT WORK IN PROCESS, and IMPROVE FLOW EFFICIENCY.

The suggestion is to improve OKRs by using this necessity based logic in connecting the Key Results of one level to the Objectives of the next level. The OKR tree will gain in clarity, and it will be easier to read.

The Strategy & Tactics Tree: raising the bar for OKRs

John’s introduction warned how it is easy to go overboard with OKRs. It is way too easy to just add objectives, without reflecting enough, or with validating the ideas with the right people, at the right level. OKRs are supposed to bring about focus, but risk creating yet another big wall decoration!

One way to “Limit the Work in Process” that is captured in an OKR tree, is to require that it is well thought out. This can be done by taking inspiration from the Strategy and Tactics Trees (“S&T Tree” for short)of the Theory of Constraints. 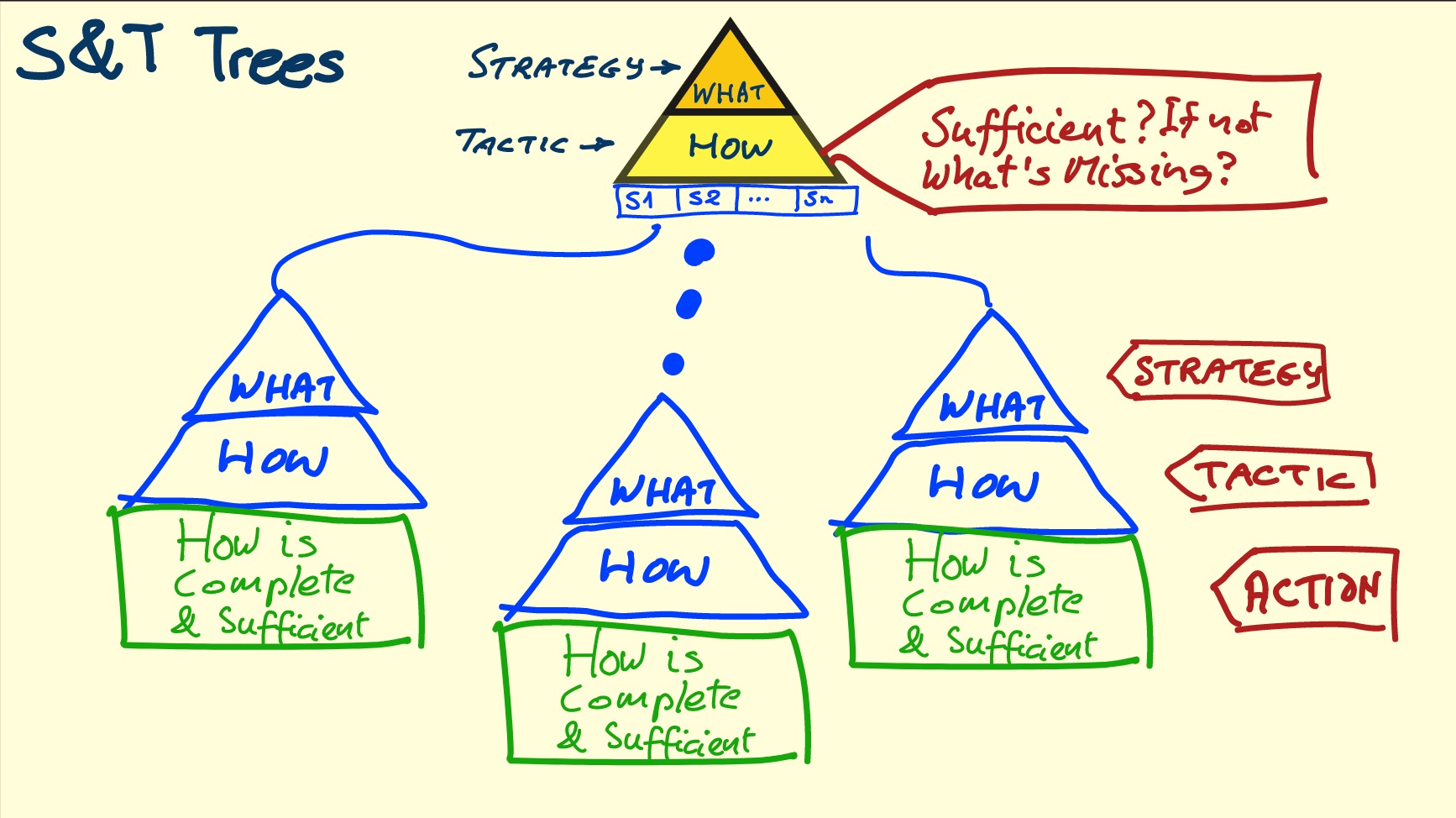 A S&T Tree is a representation of a company’s strategy. Strategy, in the view of Goldratt, is simply the articulation of what needs to be done; and the tactic is the how that gets done. The how might be broken down in different actions or steps. If any action or step is incomplete, insufficient or missing something, then there is recursive descent into a lower level of the tree.

The how of an upper node becomes the what of a lower level node; and the process repeats.

This decompsition ends when there is no remaining what that is fully actionable. At that point, all hows are complete and sufficient.

To bring about to ensure that each node in the tree is well thought out, is to use a canvas as the following one: 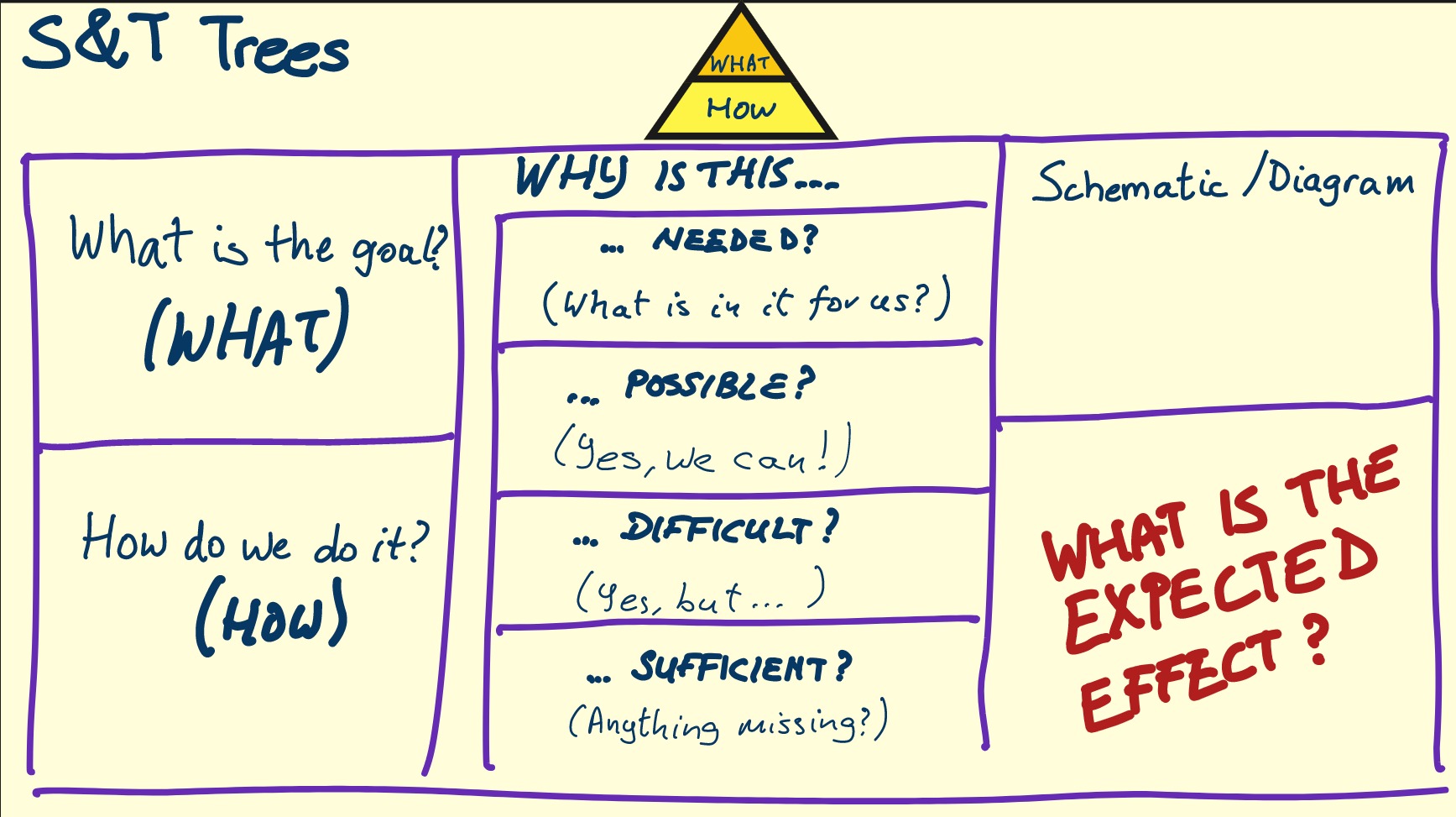 A well thought out tree!

If the above process is applied to all nodes in the tree, the resulting tree will be well thought out. The nodes exist in a necessity logic relationship; and they have been developed by considering all the critical questions listed in the canvas. We can think of it like a tree of such canvases, like this: 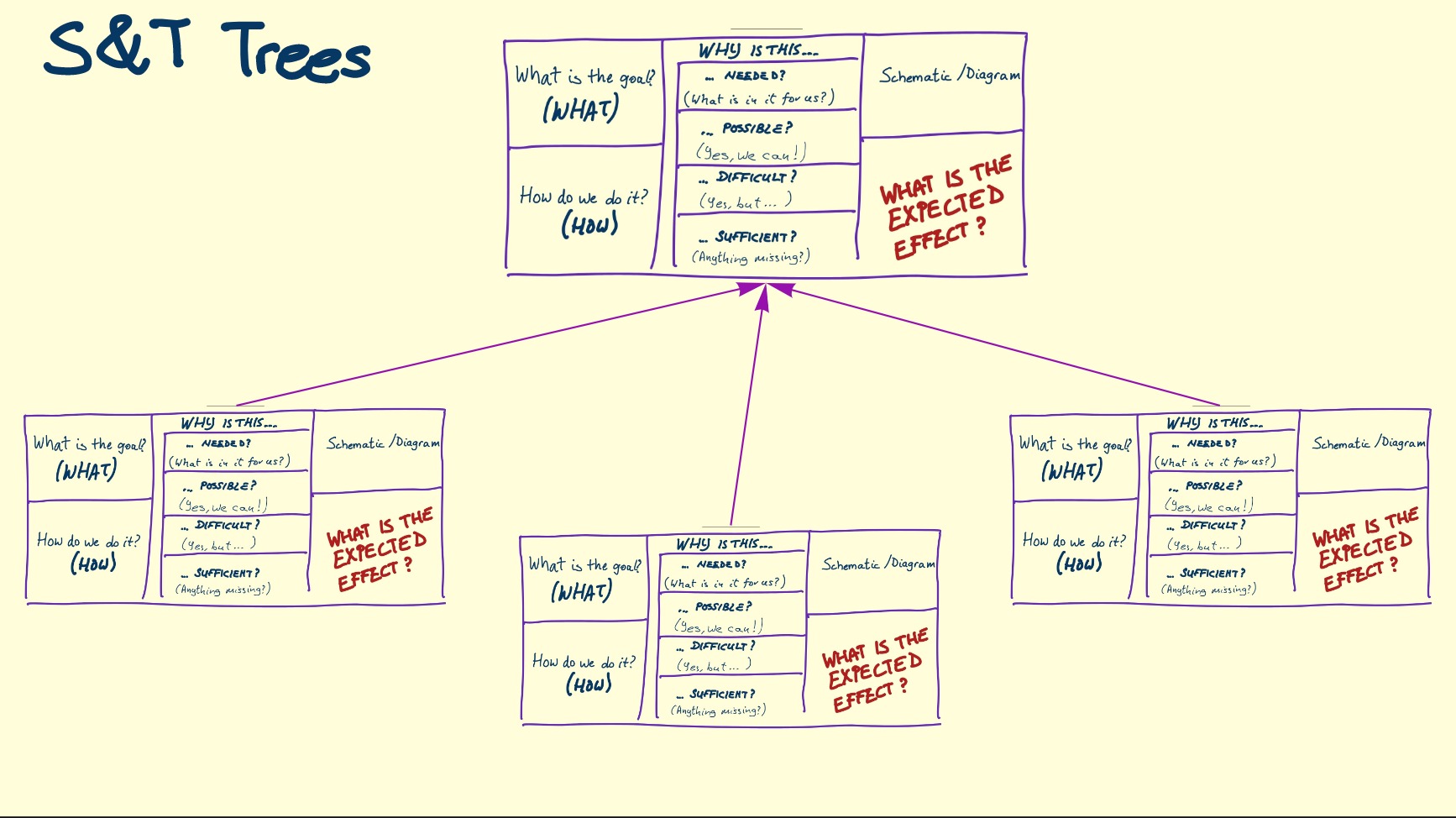 With this approach, the OKR trees will be streamlined, focused and clearly tuned to achieving the Key Results which are expressed as Expected Effects.

If you found the above interesting, there is much more to learn about these ideas in the Tame your Work Flow, How Dr. Goldratt of “The Goal” would apply the Theory of Constraints to rethink knowledge-work management book.