How Patterns become a Pattern Language

Patterns are the result of empirical observations, and they can constitute a phenomenological foundation for a scientific theory.

A pattern is not an invention; it is an uncovered solution, that has been observed to work for some time, in a variety of situations. Patterns are the result of empirical observations, and they can constitute a phenomenological foundation for a scientific theory ([SALINGAROS-2000]).

It is therefore of essence to have an approach that makes it possible to observe patterns on an empirical basis, in order to identify appropriate patterns, with all necessary attributes, and create an ontology, vocabulary and taxonomy of the discovered patterns; ordering and/or grouping the patterns according to scale and/or other relevant dimensions (like general-specific); documenting their interconnectedness and relationships.

Once “normal” patterns have been identified, they need to be further selected and qualified in order to find those that can become Alexandrian patterns to construct the actual pattern language. 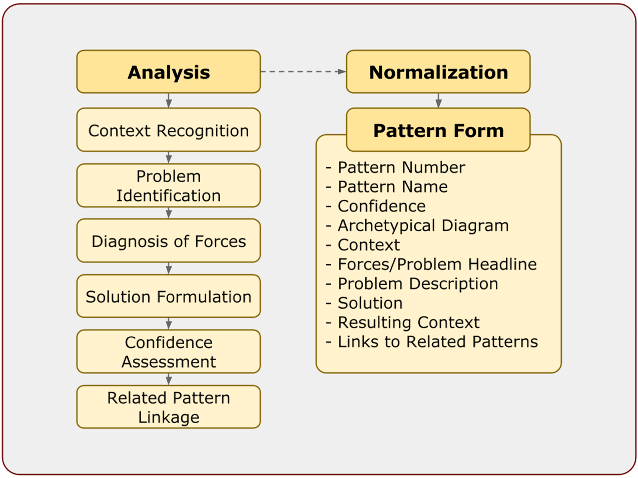 The pattern language development process, founded on pattern theory ([MESZAROS-1997];[SALINGAROS-2000]) starts with an analysis of every single pattern (ordinary acceptation) identified during the pattern discovery phase. The analysis will proceed according to the following steps:

The objective of the analysis is to either discard the pattern as non-Alexandrian, or to normalize its description through conventional attributes in a Pattern Form. The attributes of a pattern form capture the outcome of the analytical steps performed during the qualification process, and collectively constitute a canonical description for the qualified pattern.

A pattern form is essentially a template. Each pattern is described by the same format for convenience and clarity ([ALEXANDER-1977]).

There is no standard template to refer to, and one can develop new templates as appropriate ([MESZAROS-1997]). The organizational patterns for software productivity ([COPLIEN-2004]) were documented with the original Alexandrian form ([ALEXANDER-1977]), which is obviously the “classical” pattern form.

The Alexandrian pattern form is characterized by the following attributes:

The collection of all patterns documented through a pattern form constitute a Pattern Catalog, which can be considered as the lexicon (vocabulary) of the pattern language.